After school he was fortunate to meet in Athens the well-known painter Theophilos Drosos, who perceives his talent. There he has been studying for two years, creating his painting personality. Yiannakoudakis, close to the great teacher and friend, with hard work, makes his personal achivements in the technique of color and composition.

This beginning of his artistic career clearly shows how painting for him was something absolutely necessary, as it is for every person to breathe, to think, however, definitely more than a need for expression for creation. Drosos then said about his student:

"Giannakoukakis is a great, powerful talent. He is undoubtedly one of the inspired artists of our time and not just of Greece. "

The artist then follows classes at the School of Fine Arts with professors G.Moralis and P. Sarafianos. The latter gives him a lot of information useful for his subsequent decisive course.

His concerns about human existence and faith in the superior power of creation, however, make him apprentice after his visit to Mount Athos near the Russian hieromonk Demetrius where he learns the secrets of authentic hagiography and the technique of Faiyum (candle with tempera), an ancient technique that learns and uses to this day. After returning to Athens, he made his first solo exhibition in 1966 in Parnassos. In 1968, he exhibited at the "Time" Gallery of Athens and "Chrysostomos" in Chania, Crete.

His participation in exhibitions of major European cities cultivates the interest of well-known art critics such as Davis, who in his article in Sunday Telegraph writes about Giannakoudakis:

"The paintings of this new Greek artist give me the certainty that for many years no painter has captured and attributed so brilliantly the sense of these historical events. The series "Ectakomba" is sure to be highly commented and will pushthe art of collecting objects to new levels. "

"This work as a whole is the crucial work for Biblical art. For 300 years these issues have not been represented so boldy, so perfect, so artfully. " 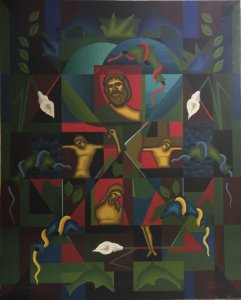 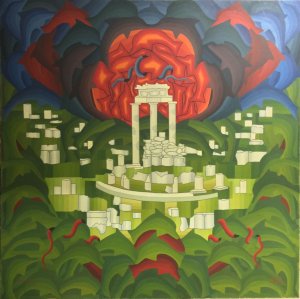 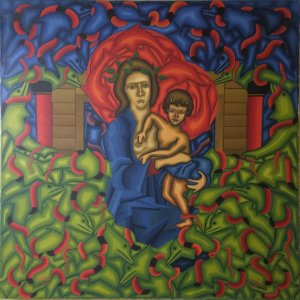 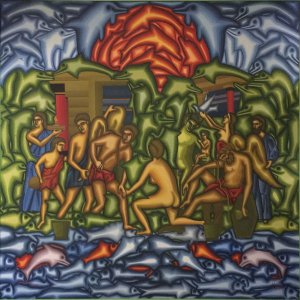