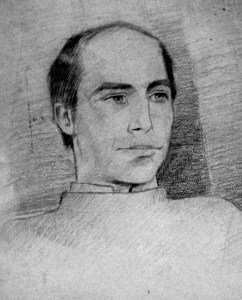 Panagiotis Messinis was born in Patra in 1949. At a very young age he started attending music and painting lessons.

In the period of 1967 – 1970 he created wellknown musical groups, such as The Spiders, Sete Amitsi (Seven Brothers), and the Sunday’s Boys, all of which were successful with the modern Greek music of that time. For a period of time he became a member of the orchestra of ΥΕΝΕΔ on its outside units.
At the same time, from 1967 to 1971 he attended painting lessons at the workshops of G. Mavroides and Gr. Papatheodoros. Around that same period of time Panagiotis Messinis, along with Gr. Papatheodoros and I. Koutsis, took part in the creation of the carriers for the Patras carnival festival.
From 1971 to 1973 he served in the Air Force with the specialty of musician and artist. He took care of theatrical and musical events and it was there that he realized his first personal art exhibition.
Ιn 1973 he moved to the United States where he worked as a musician with the known orchestra of Sotos Panagopoulos. At the same time he attended lessons for the restoration and preservation of works of art at the Stiveson School of New York. There he realized his second personal art exhibition at the Hall of Greek Cultural Events. At that time he was one of four musicians who were invited to the Metropolitan of New York to perform in Greek style music compositions of Theodoraki – Hatzidaki. He travelled to many cities in the United States and Canada where he held art exhibitions. He also decorated hotels and cosmopolitan buildings
with his art. In 1976 he returned to Greece to take over the two family business galleries, the Gallery “Art Salon” in Athens and Gallery “Zygos” in Patra.
In 1977 he opened his first gallery in Iraklion on the island of Crete under the name of “Art Salon.” He worked with numerous Greek artists as well as with artists from other countries. At the same time he opened a workshop for art restoration and preservation and he also opened the gallery “Zygos” in Iraklion, Crete.
In 1990 he had the grand opening of Gallery Desmos. In 1999 he presented the first complete website for Greek art on the Internet located at www.gallery.gr.
Ever since 1977 when he came to live and work on Crete he has decorated several places and he has painted murals on large surfaces in hotels and other public halls. They also asked him to do the decoration and composition of the Eleftherios Venizelos Museum at St. George of Lasithi, as well as the picture gallery of the Folklore Museum.
In 2004, he undertook the organizing and taking care of the pictorial activities referring to the Olympics in Iraklion since it was an Olympic city.
From 2004 to 2008 he took over the construction and artistic making and painting of all the carriers for the yearly carnival of the district of Arkalohori.
With his many years of experience and expertise, he restores, appraises and auctions works of art and collectibles of great value from public organizations and well known collectors. He has organized and taken care of exhibitions for many Greek and foreign artists. He has also taken care of many musical and poetic events, book presentations, art seminars, theatrical performances and album publications for many Greek artists.

The artworks of Panagiotis Messinis join in a concrete traditional style, the classical with a concrete sketch and theme. His pictorial themes, landscapes, seascapes, portraits, still lives, compositions, in their entirety, all from the Hellenic place, are bright and happy and they create a pleasant impression to an art lover viewer.
Artistically we would say that the artworks of the artist Panagiotis Messinis enroll in the impressionistic movement and they are characterized by the precision of sketching and the tonic harmony of colours.
Uncontradictably, the artist possesses the mystics of the painting art and of course the laws that govern it and his entire work behaves and faithfully follows the rules of painting. A particular characteristic of his ability could measure up to the finishing up with great detail his painting themes, even in the smallest pictorial surfaces. A technique that demands the skillfulness similar to the one used on a miniature.
Another remarkable detail is the way he correctly and efficiently handles light. All of his works are lit correctly, a factor that offers and justifies his art themes with consequence and creates the sensation to the viewer, that this is the kind of painting that has to do with and is associated with a kind of poetic impressionism, while parallel is also related to the expressionist movement.
Other particular characteristics of the artist would be that of the form of the colours with which he steadily offers a unique origin of a beneficial approach of the human soul, the expression of his internal content. In short, the dignity of the internal need of the artist.
With all of these positive facts, we could say unreservedly, that Panagiotis Messinis paints and obeys the rules of painting and he is successful in easily expressing his artistic uneasiness and problems and still at the same time presenting his own message.
It’s easy to understand the art theme of his works, a fact that can satisfy the pictorial interests of even an untrained viewer.


The psychographic mood that characterizes the work of the artist Panagiotis Messinis is primarily based on his mood to surface the inner self, to use it and paint it. The beautiful and sensitive psychic world of the artist is depicted in his work, his poetic sensitivity, the lyricism that emerges from these, the skillful use of colours that are reflected sometimes bright and other times dark with harmonic shades of the volumes, give the measure of his artistic knowledge and his intense sensitivity. His artwork is the result of a vigorous artistic endeavor of complexity and sensitivity that solidly carries the personal stamp of the artist. The persistent search for the real, the realistic dare, and the absolute balance of the volumes offers a result that moves and is challenging to the viewer. The artist Panagiotis Messinis confides through his works of art the wandering of his inner psychic world with simplicity and carries away the viewer in his own simple and real world, creating a feeling a safety and trust. With his accession in the depth of things he reveals new dimensions in relation to his space, the landscape, the sea, the human and with his peculiar style the materialization, revealing strong psychic dynamics in his works, which he surrounds in an atmosphere of serenity and peace that causes awe.
The colour tones change to echoes of some internal terminology and the artist doesn’t get separated from his original goal, truthfulness and warmth. The viewer even if he doesn’t realize the real message of the artist, can draw his own personal messages from his works, according to his different desire or uneasiness. His works take on a general character because he skillfully installs the human dream in his work of art. The dream that always inspires the fantasy and approaches the feelings. His ability for composition is admirable because it’s capable of communicating with any admirer and the success becomes complete at this: that his works don’t attempt to approach a human circle but they try to cause thoughts and become objects of observation through the “art” that you learn to observe.


The works of Panagiotis Messinis tell a small story which is depicted in a masterly way by the artist, presented so that the theme and the form match harmonically and give the desired result. The sensitivity and the talent of the artist appear in each one of his works. The thing though that submits and moves is the attempt by the artist to create the presupposition of carrying out an open communication between the viewer and his art, an attempt that originates from the artist’s personal research in the world of art. The art of Panagiotis Messinis starts from an object which is the feature that creates the excitement that slowly from various activities of analyzing, composition, deducting – is transfigured into a painting. A painting that stands alive and continues its life through the eyes of the viewers. Friendly faces in the majority, landscapes full of memories, seas stormy or peaceful, flowers, and common objects compose the world of the artwork of the artist. The paintings of his landscapes lose all the controlled structure except for the forms and the colours. His surfaces, rich in the gamut of colours, acquire an independent dubious sensation of peace. In the paintings of the artist, the viewer observes the playfulness of light and shadow while the colourful motives challenge feelings of romanticism and searches in the memory of other times. The colour gamut and the way that he presents his forms in his compositions put his works in the impressionistic movement. He uses small and quick brushstrokes that create colour tones on the canvas. In this way many details of the theme are not depicted, but only the general characteristics. He emphasizes the way that the light reflects on the objects and he presents the themes with a kind of unique interest. Rarely does he use black, only in cases where it is a part of the theme. The entire work of Panagiotis Messinis has interesting dimensions that if one wants to explore them, then one can perhaps find in them, a piece of himself. 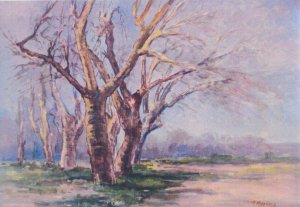 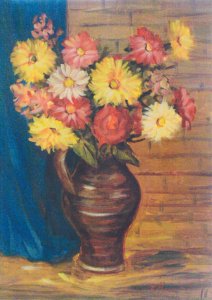 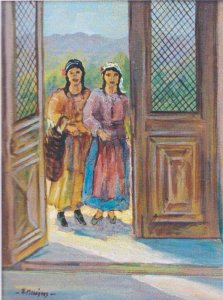 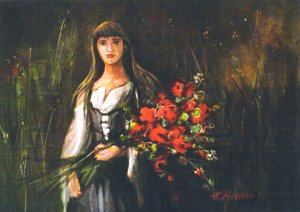 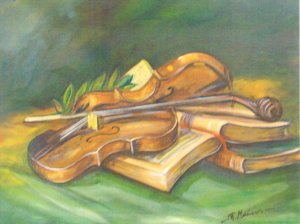 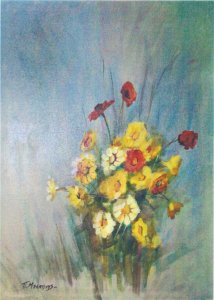 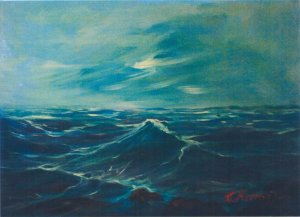 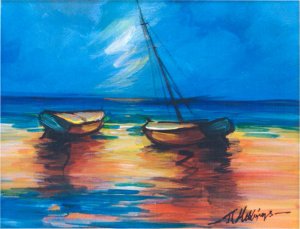 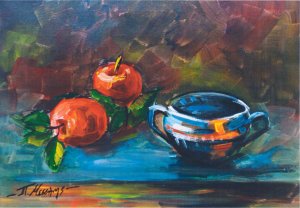 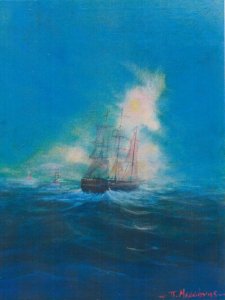 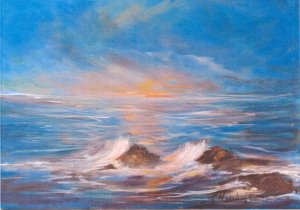 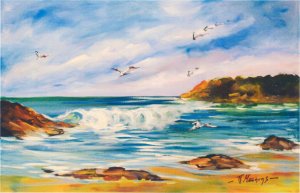 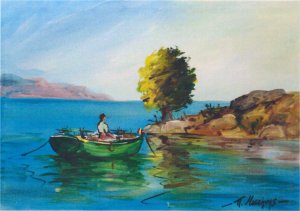 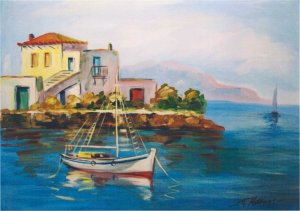 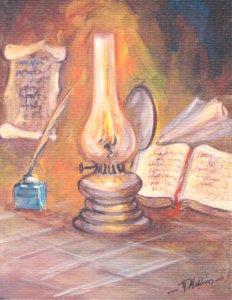 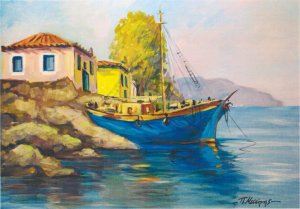 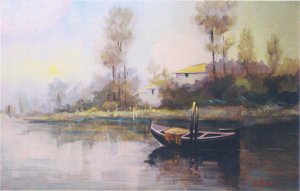 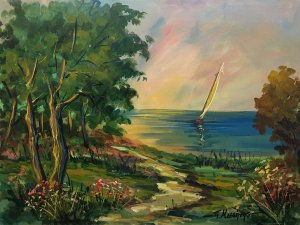 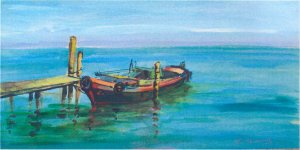 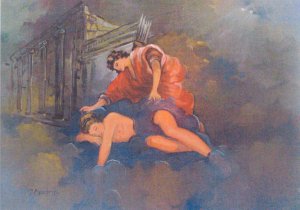 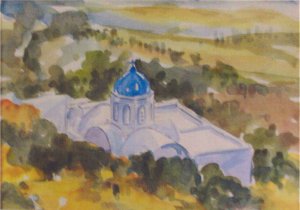 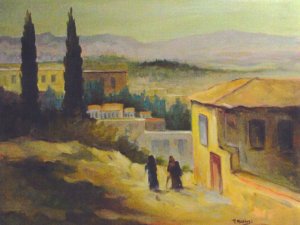 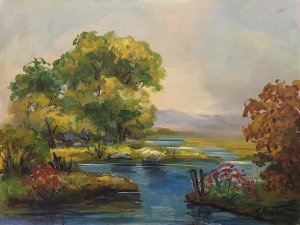 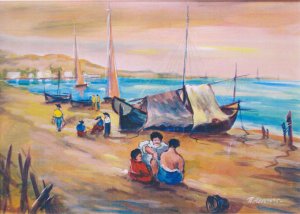 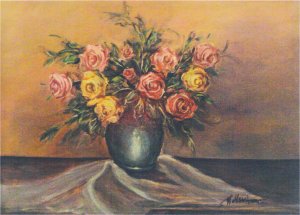 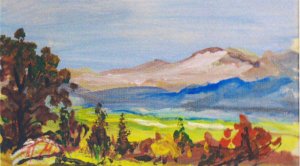 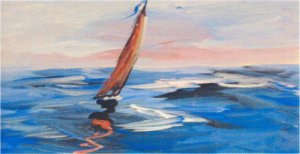